The Megalodon shark was a giant among predatory fish. It could reach a length of 18 meters and had, among other things, sperm whales and other cetaceans on its menu. The shark appeared about 18 million years ago and is believed to have died out 1.5 million years ago. This specimen is still exactly as it was taken out of the water, not cleaned.

The Megalodon shark was found in all major oceans. This tooth was found in the Edisto River in South Caroline USA. The river is known for its wealth of fossils, especially Megalodon teeth. 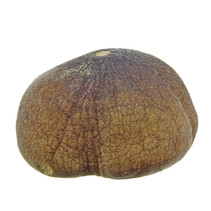