This tooth from the upper rear jaw area has been found in Smolenice in the Male Karpaty region in Slovakia. The fossils are about 40.000 years old. 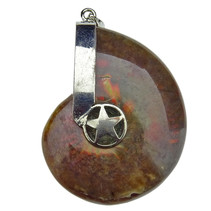