The NWA 7831 is a beautiful green meteorite that is classified as a diogenite. This therefore has a lot in common with the Tatahouine meteorite from Tunisia. However, the green crystals of this meteorite are less transparent and have a clear shine on the splitting surfaces. In all likelihood, this meteorite also comes from the Vesta Asteroid.

Taken from the desert by nomads

In March 2013, the meteorite is discovered in the Western Sahara desert by nomads. They take with them the remarkable green stones that will later be classified as meteorites and the official name: NWA 7831. NWA stands for North West Africa. In total, only 20 Kilograms of this meteorite are known, none of which has a melting crust.

Originated in the Vesta asteroid

Scientists have come to the conclusion that the meteorite originated at moderate depth under pressure in an asteroid. The Vesta asteroid with its 525 kilometers in diameter is the most obvious. Due to the many collisions with other celestial bodies, pieces of rock and rubble have been broken down and roam the space. By crossing the same path, these pieces were subsequently smashed into Earth.

This meteorite works grounding, opens your upper chakras and stimulates your spiritual development. Are you a shaman then this meteorite helps with astral travel to other dimensions and worlds. 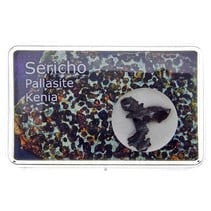 Moldavite
€119,95
In stock
© Copyright 2021 The Amber Specialist Powered by Lightspeed