Jeremejevite is in the top 10 rarest crystals in the world. It is an aluminium borate and first found in Siberia in 1883. These colourless crystals were named after Pavel Vladimirovitsj Eremejev (Jeremejev in German spelling). At a later stage, crystals with a yellowish and light blue to light purple-blue colour were also found.

There are only a dozen or so known places in the world where jeremejevite can be found, six of which are in Germany (Eifel). Unfortunately, only small, indistinguishable crystals are found in Germany. The most remarkable site was discovered in 1973 in Namibia, where these beautiful blue specimens also come from. Jeremejevite is always piezoelectric

Jeremejevite enables you to stimulate and activate your innate gifts. The energy focuses on the deepest levels of our consciousness where it can have a great influence on the formation of our character. The crystal helps to improve self-esteem and to eliminate social fears or feelings of inferiority.

Scepter from Shangaan amethist
€49,95
In stock 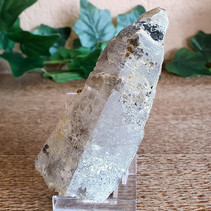