12
Ancestralite was created before the first life and travels through the Earth's crust for millions of years. It is a stone full of ancient wisdom
Read more 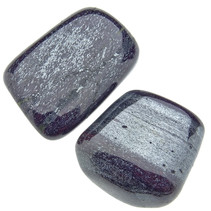 Ancestralite is a pseudomorph of marite and a variety of hematite that is formed deep in the earth's layers. It is one of the first minerals formed on Earth, even before life appeared. Over the course of millions of years, it has been pushed from the inside out, where it became mixed with other minerals. The result is this beautiful ancestralite with silver bands.

Ancestralite is found in the Minas Gerais region in Brazil. It is a relatively new find but is rapidly gaining popularity due to the high and ancient energy levels that the stone holds.

Acestralite brings ancient wisdom with it. It provides insight into things that have already been lost and helps to find memories from the past. It is a stone that passes on wisdom and provides insight for the future. The stone has a grounding and liberating effect.