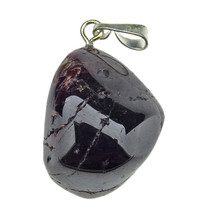 The garnet is named after the Latin 'granatus' which refers to the pomegranate. This is a red plant with seeds which have approximately the same color as the red garnets.

The red garnet is best known in the garnet family. We have nicely polished pieces that are easy to carry with you. Garnet helps hopeless situations, the stone gives energy and perseverance. The stamina, confidence and willpower is encouraged. It promotes courage, optimism and joy.