Moonstone, the gemstone under the feldspar

17
Moonstone is known for its beautiful sheen caused by thin layers of feldspar. The sheen is reminiscent of the light emitted by the Moon and has been named after it.
Read more
Sale 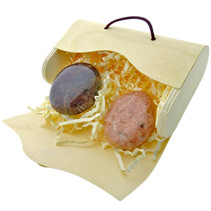 Moonstone pendant in silver
€79,95
In stock

Moonstone pendant in silver
€79,95
In stock

Moonstone is an orthoclase with albite inclusions from the feldspar group that have formed thin layers during cooling. It is these layers that break the light and give the stone its typical shine. Pure moonstone is white, but can also be green, blue, red or even black due to a mix with other minerals.

In the time of the Romans, moonstone was a popular gemstone. It was believed that these stones were formed by the moon rays. This stone was often used in amulets and ornaments. Moonstone was also widely used in the Art Nouveau art movement.

Moonstone helps to balance your emotions, it turns negative emotions such as acedia into action. It gives energy to deal with your problems. Rainbow moonstone makes contact with the goddess in yourself and contains a lot of female energy. The stone stands for fertility and learns to trust on your (female) intuition. It helps to find balance in life and in cycles.