Moldavite from the Czech Republic

Moldavite was created around 14.2 million years ago by 2 meteorite impacts. It is almost certain that the Nördinger Ries and the Steinheimkater in Germany are the remains of this.

Due to the high impact speed of 20 kilometers per second, an enormous amount of energy was released, comparable to 1.8 million times that of the atomic bomb that fell on Hirochima. Earthy rock and sand in combination with the meteorite was melted into glass. This glass was spread over an enormous distance by the force of the impact. These 'glass drops' are also called tektits. Moldaviet is the only tektite in the world with a beautiful green color and makes it unique in its kind! These pieces were found in: Chlum nad Malsi, Bohemia, Czech Republic.

These items were legally extracted and sold. No damage to nature has been caused! Moldavite extraction takes place under permits from the Czech government. Read more about this and also about the illegal extraction of moldavite in our travel report: The Dark Trade in Moldavite

Moldavite is also often used for meditation purposes, due to the fusion of alien and terrestrial energies, the stone has a high vibration. The moldavite stimulates other crystals and the higher consciousness in ourselves. Moldavite is extremely popular to come into contact with higher spirituality.

Moldaviet is unique and only occurs in 1 place in the world. The volumes found are declining rapidly and prices are rising at a rapid pace. Do you want more information about this rare gemstone? read our blog: The Mystery of Moldavite. 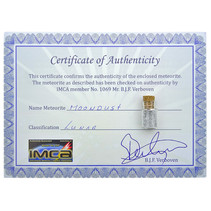 Fulgurite in a display box
€5,95
In stock
© Copyright 2021 The Amber Specialist Powered by Lightspeed