Agate is a variety of quartz and a sub-variety of chalcedony, which can be cloudy or translucent. This beautiful tumbled moss agate comes from India. The green color is caused by the inclusion of dendrites.

Agate has medicinal properties, such as protection during pregnancy, against headaches, skin disorders and balance disorders. Agate is also a grounding, stabilizing and protective stone. Inner peace is promoted for a calm and sober attitude. Moss agate gives off a soft energy and is very suitable to have around when recovering from illness or after a period of inner turmoil. 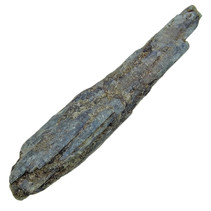