Topaz on albite from Pakistan

Topaz belongs in the row of gemstones next to diamond, ruby, aquamarine and opal. In its natural form, topaz is colorless or white. It is precisely through various impurities that topaz gets its beautiful colors. Man has been fascinated by this gemstone for at least 2000 years. The use of topaz dates back to the ancient Egyptians. At the time, it was believed that the yellow topaz got its golden hue from the Sun God Ra.

Over the centuries topaz has been used extensively as a gemstone, first rough and later in cut form. Yet it was not always easy to distinguish between diamonds or topaz. This became apparent when researching various crown jewels. A number of supposed diamonds turned out to be topaz. The most beautiful topazes are found in Sri Lanka, Brazil and the Urals (Russia). Our topaz comes from Brazil and has a natural color without treatment. The different colors have been given beautiful names over the years. For example, the blue topaz is called: Royal Blue (royal blue) and the yellow / orange topaz: Imperial Topaz (imperial topaz)

According to the ancient Greeks, the wearer of Topaz gained more strength and the stone could make the bearing invisible in desperate times. Both the Greeks and the Romans associated the imperial topaz with the sun god. Imperial topaz is the birthstone for archers and symbolizes the 23rd year of marriage. Furthermore, topaz is a very inspiring stone that easily helps you find inspiration and new ideas.

Pendant of Royal blue topaz with silver eye
€19,95
In stock 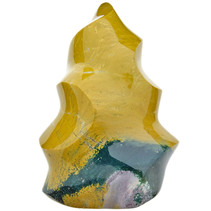