Everything you ever wanted to know about amber. Here you find answers on the questions: What is amber? Where does amber come from? Can it help with baby teething? Was a small amber amulet or a healthy slave more expensive in the Roman empire?

Amber is fossilized resin from conifers. Resin protects the tree against insects and fungi. It is a sticky substance in which insects or plant debris can easily get entangled, and eventually trapped. The resin can harden as soon as it is shut off from oxygen. This hardening, which takes millions of years, is also called fossilization. After a few thousand years, semi-fossilized resin is formed which is also called Copal. Unlike amber, these pieces still contain enclosed oils. When the resin is completely dried out and there are no more liquid parts in it, we call it amber.

Most of the resin that turned into amber, was produced by conifers in Scandinavia in the Eocene era (this lasted from 55.8 to 33.9 million years ago). At that time, the climate was relatively mild and the Scandinavian region was characterized by extensive coniferous forests. About 35 million years ago the sea level started to rise and the amber eroded from the Scandinavian forest soil. The precursors of the Baltic rivers took the amber and deposited it at the southern estuaries. Later, the amber was eroded again and taken by the river 'Eridanos', the forerunner of the current German rivers 'Weser', 'Ems' and 'Elbe'. Finally, the Scandinavian land ice spread the amber over the Baltic Sea and the North Sea. As a result, pieces of amber can even wash ashore on Dutch or English beaches. The main deposit of amber is in Kaliningrad in the Yantarny mine. Huge amber deposits are stored here. Baltic amber is mined 30 meters below the ground in thick small layers. A lot of amber is also found along the Baltic coast. Because amber floats on salt water, many pieces wash ashore on the beaches of Poland and Lithuania. Lesser-known amber deposits can be found in the Dominican Republic, Myanmar, Lebanon and Indonesia.

The Greeks and Romans already understood how amber originated. The Greek philosopher Aristotle described amber as 'succinum' or 'juice stone'. However in the Middle Ages all this knowledge was lost  and people had more peculiar theories about amber. For example: amber was supposed to be solidified petroleum from the sea or even solidified foam from whales. It was not until 1757 that the Russian scholar Lomonossow rediscovered the origin of amber.

Whether one understood what it was or not, amber has always been a popular commodity. Already in the 16th century B.C. amber was transported from the North Sea and Baltic Sea to the southern countries. This is evidenced by the bust of the Egyptian Pharaoh Tutankhamun (1332-1323 BC) that was inlaid with large pieces of carved amber. In the following centuries, the demand for amber came mainly from the rich and powerful Mediterranean area. The trade routes that ran from north to south were called the amber routes. They changed continuously, people always chose the safest routes with the best accommodations. That difficult routes where not avoided we can see in the various Alpine routes that are known in Switzerland. At this time amber was also called 'the gold of the North'. All the more reasons to choose safety over speed. The Russian amber room is one of the most imaginative works of art ever made with amber. This room was located in the Catharina's Palace near St. Petersburg. The walls in this room were completely, and very artfully, made out of amber panels. An unknown eyewitness wrote that the amber room seemed to come to life when it was lit by the sun or candles. The amber room was completed in 1760. The room stood there for almost 200 years. In 1941  however, it was dismantled and lost by the German occupying forces. The last written mention of the room is from the 12th of January 1945, when the panels were stored in coffins in Koningsbergen (now Kaliningrad). Since then there is no trace anymore. After the recapture of Koningsbergen in April 1945 the amber room was searched for, but so far without success. On 31 May 2003 a replica of the amber room in the Catharina's Palace was completed and open to visitors again.

The most common Baltic amber is known as amber or succinite. These pieces are formed by the conifer Pinus succinifera. Other conifers also produced amber, but often in a much smaller quantity. The best known examples are:

The main difference with succinite is that these species contain less succinic acids and are therefore softer and easier to break.

Because amber is fossilized resin, it belongs, together with pearls and blood coral, to the few organic semi-precious stones. It is still not clear whether amber should be considered a mineral (without a crystal structure) or as a fossil. The name amber is derived from the German word Bernstein which is derived from the Lower Saxon word 'Börnen' meaning 'burning'. Amber consists of organic compounds of carbon, hydrogen and oxygen. This means that amber is flammable.

Facts and figures of amber The most beautiful thing about amber is the enclosed flora and fauna. Usually insects, spiders and plant remnants ended up in the resin when it was still soft and sticky. The uniqueness of these fossils is the condition in which they are preserved. In contrast to other fossils, the soft parts are still visible. Despite the fact that the inclusions are discoloured, science can still get a lot of information from the stones about the era in which the resin originated. Amber with an insect inclusion can therefore be seen as a time capsule in which time stood still for millions of years. Amber can also contain air bubbles. This is a valuable source of information about the composition and quality of the atmosphere at that time. Also for the climatologists. Nice microscope pictures of amber inclusions can be found here.

The most common colour of amber is yellow. From bright yellow to an orange honey-like colour. So is amber from the Dominican Republic. Yet you often hear that the Dominican amber is blue in colour. How is this possible? The answer is quite simple: they are both. If Dominican amber is placed on a white background the stone has the 'normal' yellow colour, but on a black background it turns blue. This has to do with the way the amber reflects the light. This is not the case with all Dominican amber. The phenomenon has also been observed in some pieces of Indonesian amber. Baltic amber does not show this characteristic, but under UV light it turns green.

Amber for babies and children

Amber necklaces and bracelets for babies and children are very popular. Why is this? Its origin goes back to the Middle Ages. It was then that it was discovered that amber had a pain relieving effect. Because of this it quickly became a popular medicine for all kinds of ailments. When Robbert Koch discovered in 1886 that succinic acid has a positive effect on the body the wearing amber quickly became popular. This was also the case with babies and children who have quite some pain when getting their teeth.

Why amber has this soothing effect on babies and children has two theories. By far the most popular theory is that when wearing the necklace or bracelet a minimal amount of succinic acid is released which is absorbed by the skin into the bloodstream. This would result in a natural alleviation of pain. A less well known theory assumes that the amber passes on its generated static energy to the body, which converts it into the body's own energy.

Amber and the use of amber for medicinal purposes are covered by homeopathy. It is at all times important to approach a doctor in case of serious complaints. Never let babies and children wear a necklace or other jewellery without supervision!

Amber has the unique property of being statically charged by friction. The old Greeks gave the name 'electron' (ηλεκτρον) to amber from which later our word of electricity was derived. They discovered that the stone attracted pieces of papyrus and feathers after rubbing it with a woollen cloth. This was considered magical for a long time. It was therefore assumed that amber contained a soul of its own.

As is often the case with popular products, amber is also falsified. This happens in different ways. The simplest is to sell copal as amber. Copal is actually young amber and not yet fully fossilized. On the inside the stone is still soft. Also synthetic resins or even glass can be used. Another form of imitation is pressed amber. Small fragments of real amber are compressed under pressure into a larger piece. So pay close attention when buying amber. Preferably carry out a A amber authenticity test.

Amber is a very soft mineral and therefore not suitable for cleaning with a hard brush. We advise to only rub amber with a dry, or possibly damp, soft cloth. Do not use acids, alcohol, perfume or other chemicals to clean the stone, this can damage the stone's shine or, in the worst case, cause it to break.

Also Amber jewellery must be handled with care. Do not use ultrasonic cleaners when cleaning and do not leave amber in the water for a long time. This can damage the shine of a polished amber. When storing the jewellery, make sure that it does not lie against other necklaces or rings. Amber is so soft that it can be scratched by almost any other material. It is best to wrap amber jewellery separately in a soft cloth.

Over the centuries, many peoples have seen amber as a very spiritual stone. For example, gladiators in Roman arenas carried amber with them for better luck during the fighting and the Celtic sun god 'Ambres' was named after it. Even today amber is still seen as a healing stone that removes the negative from the body. Wearing amber stimulates a good mood and reduces a depressed feeling.

Did you know that:

Here you can also download our free info sheets about amber 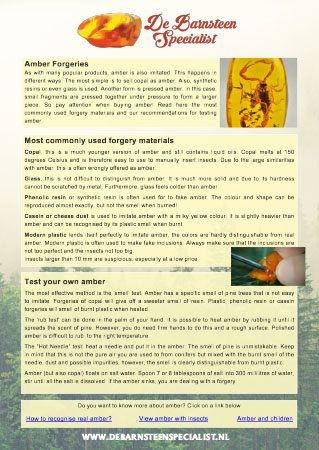