Real dinosaur tooth from the spinosaurus

Beautiful tooth of the largest land predator that ever lived. The spinosaurus could grow up to 15 meters long! That is 3 meters longer than the T-rex. Recent research has shown that the Spinosaurus was also a great swimmer, which would also explain the enormous crest on the animal's back.

Recent finds from the Kem Kem

This tooth was found in Morocco, the former habitat of the hunter. To be precise in the Kem Kem Mountains that lie in the desert area against Algeria. Many interesting dinosaur finds are currently being made here

This pointed tooth indicates the diet of the Spinosaurus. The dinosaur was a carnivore that used its teeth to catch and hold prey. The spinosaurus' beak has similarities with that of today's crocodiles. 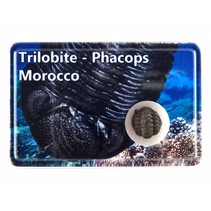