13
Red hematite quartz. This crystal began as a rock crystal and was later mixed with hematite, which gives it its red colour. This is a grounding crystal for balance and stability.
Read more 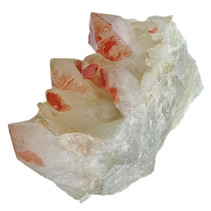 This red quartz is found in the Errachidia Province located in the Meknès-Tafilalet Region in Morocco. The color of the crystals varies from light to dark red and is caused by hematite. It seems that the hematite was not yet present at the beginning of the crystal growth. The crystal has started to grow like a clear rock crystal, in a later stage it has been mixed with hematite so that the crystals have taken on a red colour.

Quartz can be found all over the world and hematite is also common. The combination in which hematite is deposited on clear quartz crystals is a rarity.

Red Hematite Quartz has a calming effect and helps to prevent panic attacks. It provides stability in periods of stress and has a grounding effect so that you can get a clear view of everything and focus on the important issues. These crystals are ideal for an ADD or ADHD disorder.