The blue gemstone from the Dominican Republic

23
Larimar is an extremely rare mineral found only in the Dominican Republic. It is also known as the Altlantis stone
Read more 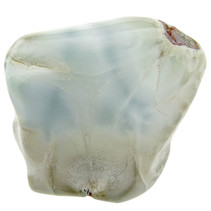 Larimar is a rare mineral. It is a blue version of the white Pectolite. Pectolite is a sodium-calcium silicate. In Larimar the calcium has been replaced by cobalt. This gives it its typical sea blue color.

Larimar is extremely rare and is only found in the Dominican Republic in the mountain range of Sierra de Baoruco. In 1916 a blue mineral was mentioned for the first time, a mining permit to exploit the stone was rejected. In 1974 Larimar was rediscovered and named after the discoverer's daughter (Larissa).

Because of its colour and location, Larimar is also called the Atlantis or Dolphin stone. Some people believe that the Dominican Republic is a remaining part of Altantis. Larimar helps to overcome negative emotions such as fear, anger and jealousy and makes place for inner peace.