11
Dark meteorite with the original building blocks of our solar system. The NWA 4502 is a CV3 chondrite from Algeria.
Read more 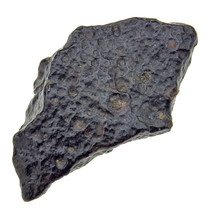 The NWA 4502 (official name) was found in Algeria in 2005. In total, about 100 kg of this meteorite landed on Earth. The meteorite is dark in colour and its surface is nicely polished by the desert sand of Algeria. The most striking thing about this meteorite are the large chondrules that are present.