3
These fossils are over 200 million years old and belong to the extinct oyster species Gryphaea. Because of its typical shape this fossil is also called the Devil's toenail.
Read more 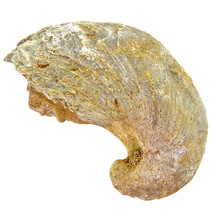 These fossil shells are remnants of the Gryphaea that belonged to the oysters. About 200 million years ago in the beginning of the Jurassic, this was a very successful species. It is a popular fossil to collect because of its typical shape reminiscent of a claw. Because of this, it also got the nickname devil's toenail.

The shell consisted of two parts and, like modern oysters, is made of calcite. The Gryphaea had a larger curved shell on which the growth lines are visible. The second shell consisted of a closing valve and in between the mollusk lived.

These fossils have been found in France, but they occur worldwide. In northeast England it was believed for a long time that the fossils could relieve rheumatism and back pain. They wore the shells around their neck or grinded them to use as medicine.