28
Beta quartz or high quartz can only exist at more than 573°C. These crystals are formed back into low quartz with the appearance of high quartz. Very suitable for meditation.
Read more 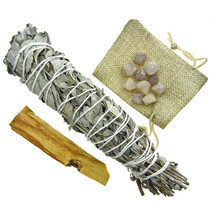 Beta quartz with sage and palo santo wood
€14,95
In stock

Beta quartz is also known as "high quartz" and can form both left and right handed crystals. These crystals are found in Indonesian West Java where they, in a volcanic area, have been able to grow under a high temperature. Typical for these crystals is the double pyramid shape.

Beta quartz is very suitable for meditation purposes. It gives deep insights and answers to hidden questions. Beta quartz can also support in penetrating dreams and provide access to answers to inner questions.