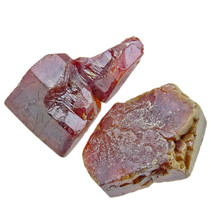 Vanadinite is a mineral that forms hexagonal (six-sided) crystals.

The name is derived from the metal vanadium, which Vanadinite a derivative of. The mineral comes in several colors but is most popular for its beautiful red crystals. It is not a common mineral and is found by the oxidation of lead ores in dry and warm climates. These pieces are from Morocco.

Vanadinite was first discovered by Señor AM del Rio in Mexico. This was in 1801 and named the mineral initially 'brown lead'. For a long time it was unclear where Vanadinite belonged to. It took until 1930 before the element vanadium was discovered.

Vanadinite helps with the acceptance of your own body, it has a grounding effect and help to feel at ease in the physical world.